Never Fight For His Attention! Do This Instead 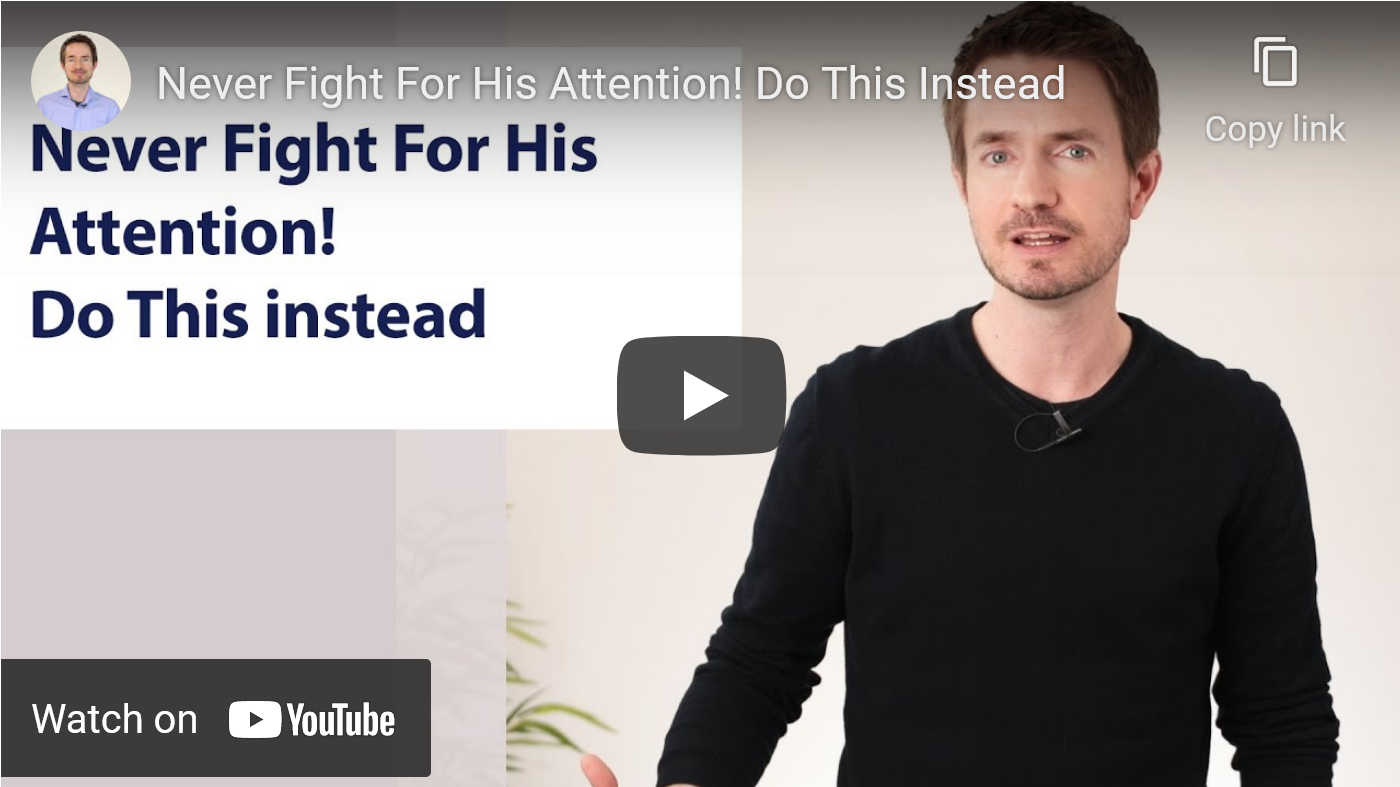 Some women, when their relationship with a man isn’t what it used to be, or when a guy ghosts them, or is inconsiderate and so on, think: I have to make him fear losing me. Because when he fears losing me, he will fight for me. He will drop everything, he will realize and then confess how much he loves me, that I’m the first thing on his mind when he wakes up and the last thing he thinks about before falling asleep. Yeah! Let’s make him fear losing me. Great love strategy. Well, that’s one of the worst ideas a woman can ever have in her love life. Let’s find out why and what to do instead in this video. I’m an author, my name is Geert, what was that? Indeed, so I also use a pen name Brian Nox, I write about dealing with difficult emotions, relationships, dating and other things and let’s dive right in.

First things first, it’s fine that a man fears losing you. Because the opposite is the man that thinks he can do whatever he wants and you’ll stick around anyway. Not good. The problem is the verb MAKE. If you you have to MAKE him fear losing you, not only will you be playing games, you will hurt your love life and your self-esteem. Always remember: if you have to make a man feel anything, he’s not the guy for you. If you have to make him love you or fear losing you then that means that it’s not there organically. So even if you get him to love you or fear losing you, you will have a lot of hard work ahead of you and will have to sleep with one eye open for the rest of that relationship. That’s not okay.

I talk about mind games often, that’s when our mind makes a mistake and makes us believe that something is true when…it isn’t. Here’s the first “funny” thing. If your mind ever thinks: I have to change what he feels about me. Then it’s because that guy is really important to you. Maybe your perfect match, or the one, your soul mate, your twin flame or whatever. Is he really though? How can he possibly ever be that important guy? If you have to make him feel things for you, how can he ever be the one. He has disqualified himself by not having those feelings organically. So it’s a mind game. It’s not because our mind thinks someone is important, that that person IS important. But because of the mind game we want to fight for that relationship or at least what we believe that relationship could one day become.

Just imagine what the rest of that relationship would look like. “Good morning honey, say are you still afraid of losing me?” “NO? Well… then I must inform you that I went out on a date with another guy last night. You thought I was sleeping next to you, but those were just pillows and your teddy bears. It was fun, great date. And those 12 messages that just arrived on my phone: other interested men. All real alpha males FYI.” If that’s a bit too nasty you can say: “say, I went for a jog yesterday and I almost got lost. Couldn’t find my way home. All the streets look alike around here. Just imagine what it would feel like if I would never ever come home again…EVER…wait is that a smile?” OR “You know how you always freak out when you can’t find the TV remote or the keys of your car right…scary right…Well what if that was me, what if you’d lose me?…” HAHA, see, if you have to make a man fear losing you, you’re fighting an uphill battle.

It’s obviously NOT going to be an awesome relationship then if you have to keep this up. Now I understand that if you ever think about using this strategy, it’s because you have feelings for him and he may be slipping away. So you want to save the relationship, you want to fight for it and the end may justify the means. But it’s a mind game. It’s never your job to give him feelings for you. If you ever feel like you have to change who you are, how you look, what you’re interested in, the kind of underwear you wear or who you are personality wise so he would like you more, he’s going to be a bad man for you. He’s perhaps not a bad guy, but for you he will be a bad man, because he will make you lose yourself!

See that’s what you should fear! Don’t make him fear losing you, be afraid of losing yourself! Because if you ever have to fight to keep a guy interested in you, you WILL lose yourself in that relationship and it will take you a long time to recover. NO guy is ever worth that. Don’t ever fight for him to have feelings for you. Don’t fight for his attention, for his affection, for his love. Fight for him when he just got mugged and that 8 year old that stole his wallet is still pinning him to the ground with his skateboard, fight for him when he’s sick and needs your help, fight for the relationship when something happened but you see he’s fighting just as hard as you are to save that relationship, but if you have to make him feel anything. He disqualified himself. We should never fight for someone who isn’t fighting for us.
Relationships are hard. Always. But if BOTH people don’t want to make that relationship work, if BOTH people are not interested in learning how to make the other person happy and feel loved, then you might as well try to sell a Tesla to an Amish Farmer. If you ever feel like you need to use this strategy or make him fear losing you, he’s not who you think he is. He’s not the amazing guy that will make you happy and he will have been proving that every single day. Fight for the guy that makes you feel happy, never fight for the guy that makes you feel miserable.

When a woman doesn’t play games like these, when she invests in a guy only when he’s investing in her too, when they both want the same thing and that’s for the relationship to succeed and to grow, when she’s herself and is unapologetic about it, when she’s not afraid to lose him, he will, just like her, make sure they don’t lose each other. Organically. No games required. And if that doesn’t happen, he simply isn’t the right guy and he’s proving it. And although realizing this ALWAYS hurts, seriously, like someone dropped a bulldozer on you, it hurts a whole lot less than trying to hang on to someone who doesn’t really want to be with us. And when we realize this, when we show this through our actions, we can become the most attractive version of ourselves. And when we do, we start to attract the people that are right for us.