Never Play it Cool When You Like a Man! 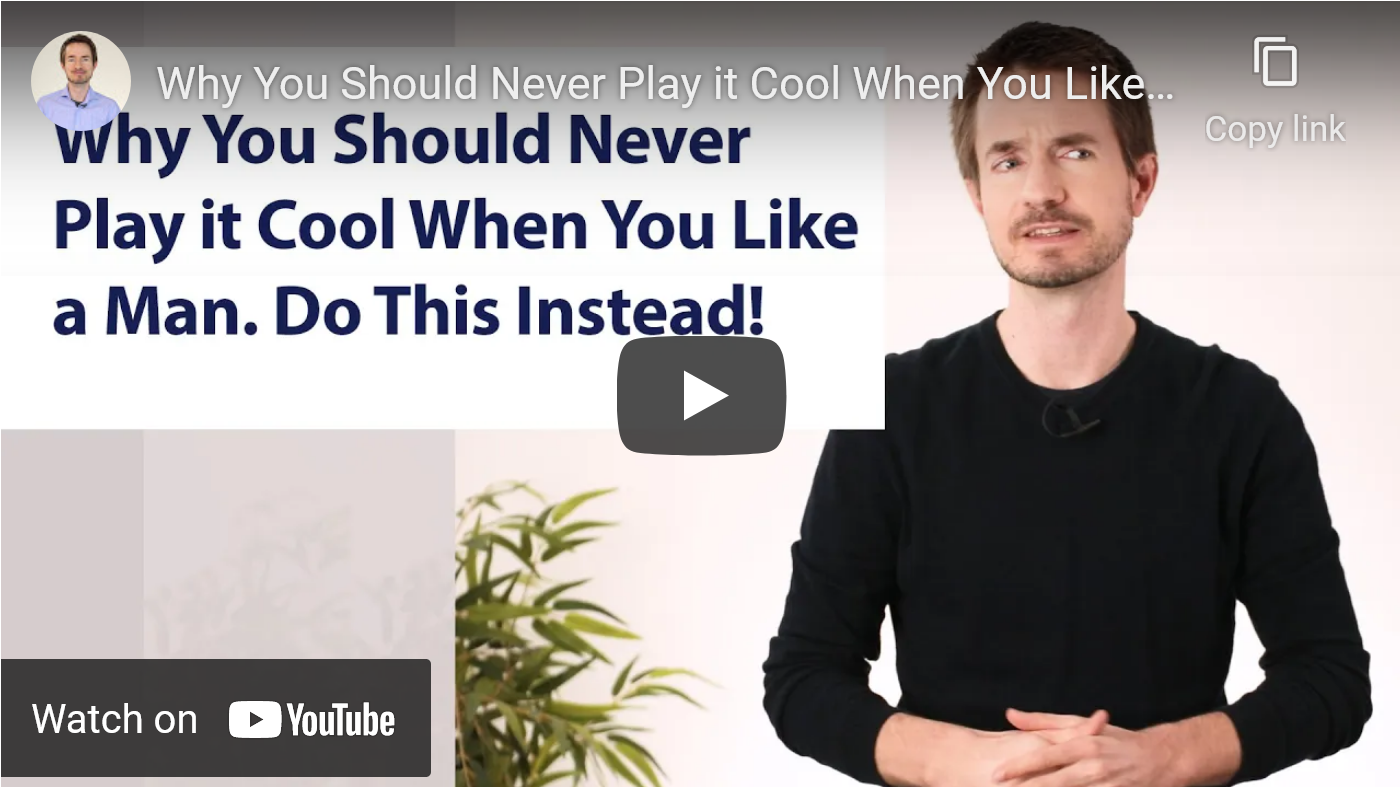 Should you play it cool when you like a man? Well first, let’s be honest: it works. If you go from being a bit standoffish to a bit more affectionate to being cool and standoffish again and so on, you can create a ton of attraction and tension. It’s what almost every romantic movie is about: yeah they clearly don’t like each other, oh they do, first kiss, oh, bad surprise that threatens the future of the relationship and the happy ending, something drives them apart, oh so they don’t really like each other anymore, or do they? aah I’ll keep watching. It works because it creates tension and a lot of people mistake that tension, when they feel it in their own love life, for attraction. So it works, but is that a good idea?

Not if you’re not writing the script for a romantic movie, no. It’s a bad idea in real life. Ok, but should you just chase after him then and hunt down the man you are romantically interested in with cupid’s bow in hand? Well, let’s talk about it. My name if Geert, since almost nobody can pronounce that in English I also use the pen name Brian Nox, I’m an author and I write books about relationships and dating for women and books about other topics. Here’s the first thing to remember: flirting, teasing, falling for someone, desire, attraction, passion, are all fun, NOT serious. So everything that is serious, a big deal, hurts desire.

Shielding off your heart so you don’t get hurt, playing it cool, feeling needy or jealous, all of those are us in serious mode and they are the opposite of fun, healthy desire and attraction. Second, let’s get rid of a major misconception. There’s obviously nothing wrong with showing a guy that you’re interested in dating him or having a relationship with him. Telling a man “hey I like you”, is not unattractive. Quite the contrary.

The only men that are scared away by a woman showing interest in them are those that would rather spend their weekend knitting 5 sweaters in a rocking chair than to be 2 minutes in her presence. The not interested men. Knowing what you want is attractive, but, you’ve probably already seen it happen that when you “chase” after something, you actually push it away. So some women then think “okay I’ll play it cool then. I’ll pretend I’m not that interested. Cause I have all the time in the world and if this man doesn’t like me, I’d rather find that out 2 years from now than today ha.”

Well they don’t think that last part but it is the consequence… Yet, they are missing something else. What pushes some people away are things like desperation and neediness. Chasing after someone because they are the answer to our prayers, because our life would be nothing without dating them, because we are desperate and NEED a relationship with them, we need to be loved! That’s what destroys attraction. Not the fact that we let someone know we’re interested. It’s the reason WHY behind our behavior, that counts. And the person we are dating or have a relationship with can feel the reasons why through our energy. More on that later, but there’s more.

Effort is crucial when it comes to dating and attraction and relationships. Too much effort is bad, because that’s overcompensating and desperation. Always being the one to reach out first, to take the lead, to make something happen, that’s bad. Too little effort, or playing it cool, is pretty bad too. Think of a man who finally mustered up the courage to face his nightmare aka rejection and ask a woman out on a date and he says: want to go on a date and go to a restaurant. And she, although VERY attracted to him, says: “well … I gotta eat, so…. Why not, I don’t have anything else to do, whatever”. What a great way to start a healthy relationship!

So what should you do then when you’re really interested in someone? Be mindful of your internal beliefs and your energy. The reason WHY you do what you do. If I would meet a woman and at the end of a successful first date I would say: “I really want to see you again”. Then she’s going to feel a certain energy coming from me. If I would say: I really NEED to see you again, can can I see you again? I really hope so…”. Then she’s going to feel a totally different energy.

If I would tell a woman: “I’d like to go out on a date with you, how about Thursday?” And she says: “ah I can’t Thursday”. And I say: “ah too bad. Would have been fun”. OR I would say: “oh, that’s a pity, or how about Friday? Or Saturday, any day of the week? I’ll make time” The energy is totally different. It goes from a normal level of healthy romantic interest, to neediness and a bit desperate. That’s what destroys attraction. And our self-worth and beliefs produce the energy and come up with the words here. How we act and what we say.

So there’s never a need to play it cool, but it can be important, because we all have our scars and “demons” from past relationships, to ask ourselves: “am I doing this out of desperation or dependency, or out of healthy interest?” And if it’s out of desperation, we’ll have to be emotionally intelligent and not do it. Not use those words in that text message or conversation even though we feel the urge to “just be ourselves” and share our needy feelings with them. “You complete me, it feels like you’re the one I’ve been waiting for my entire life”, before the drinks are served during the first date.

Just a tad too soon. But go for it! Playing it cool on one hand, and being needy and dependent on the other hand, are the extremes. There’s a healthy balance in the middle. If you’ve been talking to a man who’s not asking you out on a date, let him know. “So are we going to keep doing this, cause I think this would be the time where we go out on a date”. If you’re dating a man and you think it’s time to start an actual relationship, let him know. When done for the right reasons, it’s not needy. It’s also a time saver because you’ll see his cards. And when they are bad you leave.

However, with that all said, don’t forget, especially early on, to maintain the challenge by flirting and teasing as well, by creating some space here and there, because that is what creates desire, passion and attraction. There has to be room for challenge and some mystery. It’s what makes it fun! But you can’t do that by playing it cool. Passion and desire are hot, not cool. They’re playful, not serious.

For example, if during a date, so live and in real time, you tell a guy after he says something silly that he’s aware of: “ah, you shouldn’t have said that”, he may go “why?” and you then say: “I was just starting to like you just a tiny little bit” This is the type of teasing that can create the necessary challenge and none of that will happen if you shield your heart so you don’t get hurt or if you play it cool.