When a Man Stops Chasing You, Here’s What to Do (and how to prevent it) 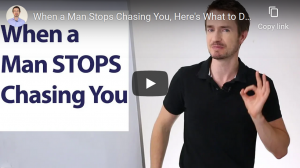 And if you want even more, my online video course is very powerful.

When a man STOPS chasing a woman, what’s he thinking and how should you respond?

First we’ll need to look at what a man thinks as he’s still flirting with you and starts chasing after you. So that’s even before the first date and the relationship.

When a guy chases after a woman, he wants her, in multiple ways. If that woman is dealing with a good guy, it won’t just be the bedroom he’s thinking about by the way. Most men really do think about other things as well. Like, cars, and money and achieving. Now between us, that’s usually STILL related to women and bedrooms. Some guys believe that as soon as they drive an exotic sports car or earns a lot of money, hot women will flock around their car and want them like they are the best gift to womenkind since chocolate. That obviously rarely happens.

But good men want to get to know the woman they are chasing after, they can talk for hours during the first dates or on the phone. If you didn’t know any better, you’d start to think men love looong conversations even about emotional subjects.

In general, when a man chases after a woman, he wants to prove his worth to her, his value. He will try to impress her. This can be financially by talking about how much money he makes, by accidently putting his car key in a blatantly conspicuous location you couldn’t possibly miss even if you wanted to (that’s the car that attracts women thing again), by accommodating to your needs and treating you like a queen, by bringing you a breakfast in bed that would make a five star hotel buffet super jealous… there’s a variety of ways that he may try to impress you, but when a man loves and chases after a woman, he wants her to think: this is the greatest guy I’ve ever met. Thats what hes chasing after. And therein lies the danger.

In all honesty, a lot of men believe there would be no greater feeling on earth than being in a relationship with an attractive woman who totally ignores his shortcomings. She adores him unconditionally. She continuously repeats that he’s the answer to her prayers. She even wonders out loud whether he is God, given his perfect abilities to do…well, just about anything. That’s what most men think they want.
Until they get it. Then they run.

And this is where the chasing then comes to an abrupt end. This is a very strange dynamic in a lot of relationships. If you give a guy what he wants, he will stop chasing.

And now his mind starts to go to his other needs: oh I totally forgot I have these friends I used to hang out with….I should see them more often and yeah there’s type of sports I was really into, and right: my career, I’ve got to spend more time on that too… Now I’ll discuss this in another video, but it’s partially normal that at a given stage in the relationship we don’t keep focusing our attention solely on our lover. That would be very unhealthy.

But if he feels like he really “got” the woman he was chasing after, she may lose a lot of importance to him, possibly ALL of the importance she previously had.

Let’s just focus on a real hunter for a second, I love animals I hate hunting, but this will make sense.
A man who chases after wild animals like a boar (toon in beeld), likes the excitement of the chase. It’s difficult and it requires an effort, that’s what most men like. Imagine how much “fun” he would have if the following would happen.
Our hunter is trying to hide somewhere in the woods, looking for the perfect lookout spot. And as he just installed himself as silently as possible, he hears “hey psst psst”.
He, quite surprised, looks up and it’s a boar, standing right next to him.

We chase after that what runs away. It’s law number one in the wild. The bear attack signs always say: DO NOT RUN. That’s pretty counter intuitive, isn’t it?

So, if you want some predator to chase you down, then run away from it. The same counter-intuitive rule applies to your dating life and romantic relationships.

When it comes to men and relationships, the following rules apply:
the person who depends the least on the outcome of a relationship, attracts the other one. So, Never let your guy fully get you. Never make your attention and time cheap or easy to get. Not while you’re dating and not in the relationship.

Your time is your most valuable asset. Only start to chip away time normally spent with friends, family, working out, your hobbies when he really deserves it. Never just lavish him with attention, especially not too soon in the relationship. Never accept bad behavior. That’s sign number one for any guy to know he “got” you. Know what you’re worth and know that you’re worth a lot. Don’t be the one who initiates contact most of the time. Allow him to do the chasing, don’t present yourself on a silver platter.

And whatever you do: never play any games!
Always remember: The high value woman IS hard to get, she never plays hard to get.

When I give advice like this, some women think: “I’m not stupid, this is advice for needy and low value women, not for me!” Those are the exact women who fall into the traps I’m describing here, they think it doesn’t apply to them and because of that they are sometimes blind to their own mistakes in their romantic relationships. Nobody is immune to this. Very successful women make these mistakes too in their dating life and relationships.

You should see the women who read my books, buy my video course or just listen to my dating and relationship podcasts on my website. They’re successful, attractive, some of them are movie and television stars, some own their own company, some lead big companies, these things can happen to all of us in our love life.

Men of course make these mistakes as well and I personally have to remain vigilant too. Falling for someone gives us so many emotions that it’s often hard to handle all of this. Especially when love makes us blind. Try to be mindful of that whenever a guy starts to chase after you. Don’t let him catch you fully, ever.